Contributions to causes supporting racial justice and equity increased by 15x in June on the Benevity platform, boosting total giving by 71 percent

CALGARY, AB – August 4, 2020 – Benevity, Inc., the leading provider of global corporate purpose software, today announced that the company has reached a significant milestone: more than $5 billion in donations — with an average user donation size of $125 — to support more than 251,000 vetted nonprofits worldwide have been processed through its platform. The donation milestone was reached in April following an outpouring of support from companies and their people during the global pandemic.

In June, another record was set with over $300 million in donations going to 64,000 causes through the Benevity platform in a single month. Donations to causes supporting racial justice and equity make up 55 percent of June’s donations with $166 million contributed in June versus $10 million in May. This represents a staggering 15x increase, boosting total giving through the Benevity platform by 71 percent. For the first time in the company’s history, causes supporting racial justice and equity make up nearly all of the top 10 recipient causes for the month of June. Countless more people got involved through their company’s corporate purpose programs, tracking 434,000 volunteer hours (up 16 percent from May) and 29,000 positive actions (up 250 percent from May). 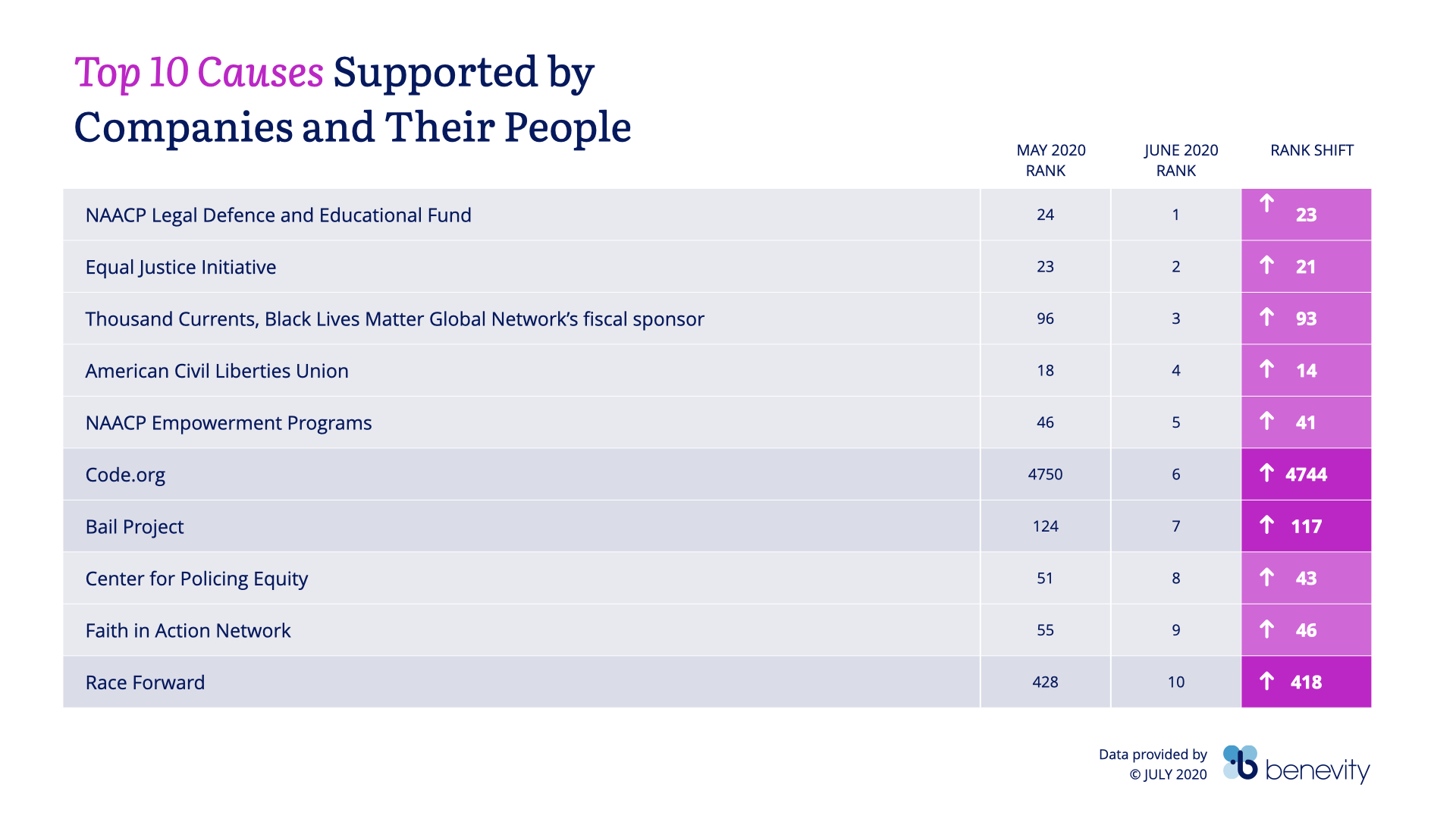 In our twelve-year history, we’ve never witnessed such a groundswell of support for any single cause area, which speaks volumes about the urgency people are feeling about the need for change when it comes to inequality, racism and social injustice.

“It’s heartening to see companies taking real action instead of lip service on these issues – especially by acting as catalysts for their people and their customers to participate on their own terms and choices," de Lottinville added. "Not only is this good business — diverse workforces are more innovative and customers want to buy from brands that align with their values — it’s also unequivocally the right thing to do. We are proud that our growing ecosystem is helping millions of people gain a sense of self-efficacy through engagement and action, and helping companies activate their purpose and power more authentically.”

Since surpassing $5 billion in donations in April, Benevity has already processed another $600 million in financial contributions. The company has also tracked 32 million hours of volunteering time, 210,000 positive actions through their Missions module, and awarded over one million grants as of July 2020. With increased adoption of the Benevity platform and its holistic suite of corporate purpose solutions, the company expects to see continued engagement as the U.S. presidential election nears, especially as it was also a major catalyst for event-triggered giving in 2016.

Benevity, a certified B Corporation, is the leader in global corporate purpose software, providing the only integrated suite of community investment and employee, customer and nonprofit engagement solutions. A finalist in Fast Company’s 2020 World Changing Ideas Awards, many iconic brands rely on Benevity’s cloud solutions to power their purpose in ways that better attract, retain and engage today’s diverse workforce, embed social action into their customer experiences and positively impact their communities. With software that is available in 20 languages, Benevity has processed more than 5 billion dollars in donations and 32 million hours of volunteering time, 210,000 positive actions and awarded one million grants to 251,000 nonprofits worldwide.