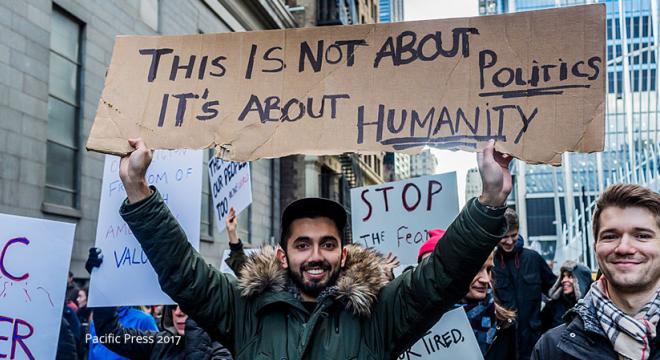 Corporate Goodness: Modelling the Behavior We Want to See in the World

It goes without saying that it has been quite the past few weeks! Enough has been written by political pundits that I need not repeat all the details here but suffice to say that the number, nature and bravado of the goings-on have attracted the attention (and concern) of the world.

In something of a macabre silver lining, to what may otherwise read as one of the most backward periods in North American history, is the way that right-thinking people have stepped up to voice their constructive dissent, including many iconic companies.

Apple, Google, Nike, J.P. Morgan, Goldman Sachs and thousands of others have their leadership speaking out or are otherwise taking steps to provide contrasting opinions on the ethos of the executive orders.

To make matters more complicated, the U.S. House is planning for $6 trillion in spending cuts over the next decade. And the U.K. government has announced welfare cuts of $14.5 billion a year by 2018.

This spells trouble for the most vulnerable members of society and almost certainly for government departments that look after the health and education of its citizens. If the populist “more for me” mantra begins to take hold, who will loosen the grip?

The socio-political shifts we are seeing sweep across the West are unquestionably prompting companies to become more actively involved in the interests of society.

In January, the 2017 Edelman Trust Barometer revealed that of all types of society’s institutions – governments, business, media and NGOs – governments are perceived as the least credible and companies are now viewed as the only ones that can make a difference in the world. Although corporate America has occasionally spoken out on policies in the past, the uniformity and rapidity of response against the threatening actions of a sitting U.S. President are remarkably rare.

The socio-political shifts we are seeing sweep across the West are unquestionably prompting companies to become more actively involved in the interests of society. A welcome antidote to populist ideologies from a historically politically abstinent force.

As the company that powers some of the world’s largest companies’ “Goodness Programs,” Benevity has seen first-hand the increasing investments companies are making in manifesting a sense of purpose, values and meaning around their corporate identity, operations and relationships.

While “corporate social responsibility” budgets have been slowly and steadily increasing over the last decade, and the mantra of pursuing both profit and purpose has been taking hold, we appear to be on the precipice of an irreversible trend that will see companies putting Goodness at the forefront of business.

Organizations of all sizes are recognizing that the culture they create and display to prospective employees and customers is an increasingly relevant component of their business and competitive positioning.

By 2020, 50% of the workforce in the U.S. will be millennials. By 2025 it will be 75%. This is not news to anyone in the corporate world, but with the rise of this socially conscious generation of workers, we are seeing the purpose and prevalence of traditional volunteering – and even corporate granting and sponsorship programs – evolve.

Once purely focused on fundraising and sending checks to a small list of charities for community impact, these programs have emerged as a must-have in the corporate toolkit for attracting, retaining and engaging today’s diverse workforce. No longer just the right thing to do, these programs are fast becoming a key component of corporate and human capital management strategy.

In a recent study by Deloitte, it was found that 2/3 of millennials surveyed didn’t expect to be in their current place of work by the end of this decade.

The training and transitioning of new employees for this predicted exodus costs a company 10 to 30% of an individual's salary, and for highly technical positions it can cost more than double their pay, according to a review of studies by the Center for American Progress.

The good news is that, in the Deloitte study, it was found that if a company was authentically seen to be socially responsible, respondents were much more willing to stay. Employee churn and disengaged employees costs more than $1 trillion annually. An executive order around improving engagement would be a step in the right direction.

Goodness Programs are designed and primed to enable their people, consumers, suppliers and communities to rally around the causes that matter to them and the company in an engaging and impactful way.

Many corporations have a lever at their fingertips that they can use to make a difference that will benefit their business, people and society at large. Their Goodness Programs are designed and primed to enable their people, consumers, suppliers and communities to rally around the causes that matter to them and the company in an engaging and impactful way.

Instead of waiting for the “charitable arm” of the company to do something, we are seeing progressive companies embed their Goodness programs more deeply into the fabric of their being. And this is coming at a time when the world may need companies to step up more than ever before.

Already, this week we saw a grassroots movement amongst Googlers that saw employees raise $2 million for refugee support that was then matched 100% by the company in less than 24 hours.

Just a month ago, one of our large global manufacturing clients raised almost $30 million for human rights in a simple 200% match campaign. In January, we saw donations to the ACLU through our platform spike by 33 times the average donation to this organization before the election, almost 60% of which came from people who had never donated to the ACLU before.

And we are seeing more clients than ever mobilize their people to volunteer in support of the UN Sustainable Development Goals that aim to achieve lofty outcomes, like eradicating poverty and hunger by 2030.

Now, more than ever, by integrating Goodness into their strategy, corporations have the potential to support humanity and provide a welcome reprieve to the mounting anxiety, anger and disbelief that is spreading across the globe.

Most companies already have a social mandate. But it’s never been more important for them to leverage the passion of their people, the purpose of their company and the tools at hand to combat populism by bringing people together in pursuit of the collective good.

And, with the rise of consumer interest in business best practices, companies are right to use their social sway.

While it is hard to argue that growth and profits aren’t still the driving force in corporate America, we are seeing more and more business leaders express their purpose alongside their financial mandates.

This is highlighted no clearer than when Paul Polman, the CEO of Unilever, the third-largest consumer goods company in the world, stated: “There is no enduring business case for poverty.”

The political landscape is changing rapidly and with it, the role of the government as a warden of the health and care of its citizens. Now, more than ever, by integrating Goodness into their strategy, corporations have the potential to support humanity and provide a welcome reprieve to the mounting anxiety, anger and disbelief that is spreading across the globe.

That they can do so and also help their businesses is part of a new paradigm where all companies reflect their hybrid goals of profit and purpose.

Evolution of the Social Impact and Corporate Social Responsibility Professional

How Atlassian Designed a Skills-Based Volunteering Program That Digs Deep