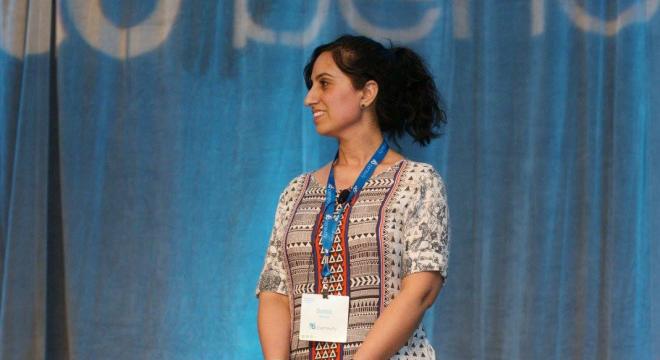 This content was originally published on LinkedIn on 8/1/2017 by Benevity VP Marketing, Sona Khosla.

Visibly, I’m a minority female in a leadership position at a tech company. So you might think I know a thing or two about diversity and inclusion in the workplace (affectionately known as D&I). Admittedly, I’m no expert and I haven’t read very much of the literature on this topic. But I have a few experiences of my own that I’ve been sitting on and thought was time to share.

In the past … Have I been passed over for a promotion because a man was given the job I could do? Yep. Has someone been surprised that I speak English so well when I opened my mouth? I hadn’t thought about it until someone recently said something. Has a male boss taken credit for my work? Definitely (and years later it still makes me rumble with anger).

For all of these reasons, and more, I’m relieved that diversity and inclusion are fast becoming a part of the corporate social responsibility conversation. It’s highlighting the nuances of peoples’ varied experiences at work, and in the world. For those of us in business, it’s helping to develop an appreciation for the unique challenges our friends and colleagues face. At its best, it is influencing the way we think, feel and act both in the corporate setting and beyond.

Are we being fair? Are we bringing on people for what they can contribute? Or do we select them because they are the same as us and that makes us comfortable? Are we providing everyone with the best experience possible? Diversity comes up in recruiting discussions all the time, especially at fast-growing companies. And sometimes — hopefully — it shows up in other important conversations. Like it did for me when it surfaced in a conversation I had with the CEO of the company I work for, Benevity.

I was born and raised in Canada. All of my academic and professional years have been spent in a Canadian context. So in a lot of ways, I’m more like the white guys I sit with around the leadership table than it looks. We speak the same language. We share a similar appreciation for a morning ritual that includes coffee and Timbits. We feel the same pressure to get things done, to lead with integrity and to make our work matter beyond the four walls of our office.

From my point of view, the diversity discussion has been disproportionately focused on outward differences. We mostly talk about leveraging the unique talents of women, racial minorities, less abled people, people with fluid gender identities, people who are not heterosexual, people of all ages. That’s mostly stuff we can see on the outside. And it’s important because it shapes our experience of ourselves, our interactions with others, and how the world perceives us. It has a very real effect on how we show up — in life and at work.

I would also urge us to go deeper. We need to recognize where our biggest differences may lie ...

In our psychology, in the way we were raised, in past experiences that shaped who we are, in the beliefs we hold, in the values we express, in the traumas we’ve faced, the accomplishments we’ve had, the losses we’ve sustained. All of these subtle factors also shape our experiences, our interactions with others, our beliefs about the world, our values. And most of them cannot be seen. So they often get recognized — and therefore, talked about — less.

Here’s what I mean: I feel what others feel. I seek harmony. I’m confused about whether I’m an introvert or an extrovert. I’m obsessed with growing, learning and developing. I am sensitive to my environment. I take it personally and professionally. I’ve always put what’s best for the person ahead of what’s best for the bottom line (and it’s rarely gone well, despite having a clear conscience!). All of these things make being in business hard — harder than being a woman of color. Harder every day than the few times in my career that I’ve been passed over for a promotion, or brought in as the token minority in a corporate photo opp. It’s these inner qualities that have determined whether I feel like I belong — or not. It’s these vulnerabilities that make me different. More than the colour of my skin and the parts of my body. It’s these qualities that don’t often “belong” in business.

If we are to build better businesses (with better outcomes), we need people who will challenge us to think differently, force us to consider new perspectives and angles, take us to uncomfortable and new places, show up in ways that force us to reconsider stereotypes, share divergent beliefs and make us think twice about what might just be an unchecked belief about something.

We need to recognize that diversity stems from the outside AND the inside.

It’s time we go beyond the surface of this discussion (beyond counting minorities) and truly understand that the diversity we need is not a stock photo with every race, fashion, age and gender represented.

The diversity we need is one that empowers us to use our differences to create something better, together.

A while back, I had a conversation with our CEO, Bryan. We were talking about the behaviours, beliefs and attitudes I was bringing to the company. We were talking about whether I fit in the company — was I more like or less like everyone? We agreed I was less like. Bryan said it was hard for him and I admitted it was hard for me. That was the moment it became clear to me that diversity and inclusion is just as much about the differences on the inside as it is about the differences on the outside. Then, after a pregnant pause, Bryan looked at me and said these three words that have forever changed me: “Keep being different.”

I can’t adequately express what that was like. For the first time in my career, I felt like the things that made me really different were acceptable — even encouraged — at work. It was profoundly humanizing and deepened my trust and confidence in expressing my authentic self at work.

To me, this is what real diversity and inclusion in business looks like.